The Wildebeest Migration; 6 Reasons You Should Witness the Migration – GoGoAway.com
Skip to content 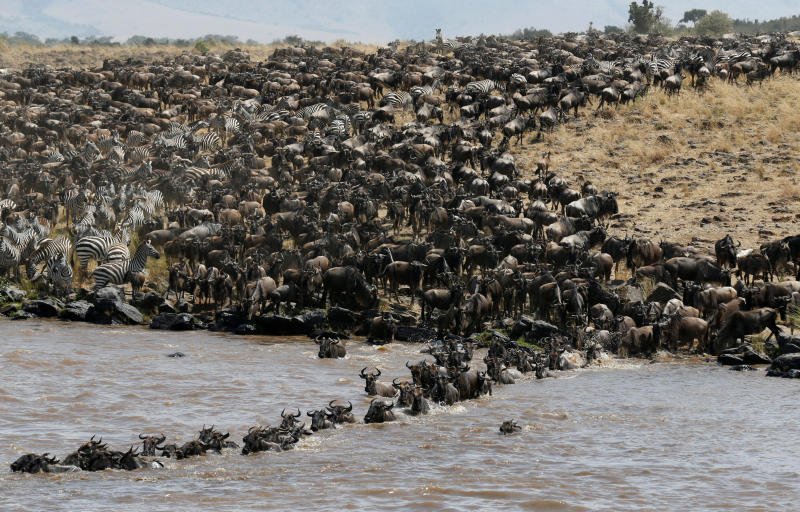 When you think of an African safari, what comes to your mind? If you are planning to visit the cradle of humanity, then the wildebeest migration should be on top of your things-to-do list. Every year, an estimated 1.7 million wildebeest embark on a daring journey in search of pastures. The wilderness migration, which has been listed as one of the world’s natural wonders, is the largest migration of animals on earth. The thundering vibration and roars of millions of wildebeest, gazelles, zebras, lions, cheetahs, and crocodiles are the most fascinating show on earth.

Here are the top 6 reasons why you should witness the migration.

1. It is the largest animal migration on earth

The wildebeest migration attracts an estimated ten animal species, including 1.7 million wildebeest, 400,000 gazelles, 300,000 zebras, 12,000 elands, and other carnivores, including the big five (elephant, rhino, lion, leopard, buffalo). The migration is a daring journey, with only the strongest surviving the 1000 kilometer track. The wildebeest are the dominant migrators, with other animals taking advantage of the numbers to evade the predators.

2. The migration is an all-year event

The migration begins in December every year. As the dry season sets in Serengeti national park in Tanzania, the animals start migrating towards the western woodlands (Masaai Mara in Kenya). How the wildebeest know when to begin their journey is a mystery. While scientists have little explanation to explain the phenomenon, conservationists believe that the changing weather patterns(appearance of lightning and thunderstorms) are a clear indication for the animals. By March, the animals arrive at Ngoro Ngoro conservancy, where thousands of wildebeest give birth. The journey continues to gather momentum as more animals join in the migration.

In April, the animals arrive at Simba Kopjes in Serengeti National park. Simba is a Swahili word for lions; hence expect to see real predator actions with thousands of calves being killed by the lions. The journey continues towards the crocodile invested Gruemti river as the momentum keeps building up.

The peak of the migration occurs in August when the animals have to cross the crocodile-invested Mara River in Kenya. Thousands of wildebeest die in the river, with only the strongest and faster surviving. By October, the animals must begin their journey from Masaai mara in Kenya back to Serengeti in preparation for another season of migration in December. Whichever time you choose to experience this magic, you are sure to get some action. However, crossing the Mara River is the most daring journey of the migration and a subject of many films and documentaries, making it the most preferred time to witness the migration.

3. Get to experience the magic of the birthing season

The birthing season, which begins in February, is considered as the start of the migration. During the month, an estimated 400,000 wildebeest calves are born in less than three weeks. The synchronized birthing season is another natural wonder about the wildebeest and a great feast season for the predators. Every day, an estimated 8000 calves are born, making a great feast for hyenas, cheetahs, and lions, which can be seen hovering around the plains of Ngoro Ngoro conservancy where the births occur. Thousands of other animals like gazelles and zebras take advantage of the wildebeest numbers to calve during this season.

However, unlike other animals, wildebeest have a profound ability to grow and mature within days. Wildebeest calves can walk within a few hours after birth. Within a month, by the time the migration begins, they are old enough to join the herd and dodge predators. Their ability to mature fast is considered as a survival tactic to avoid predators, and this explains why predator actions have a limited impact on wildebeest numbers.

4. Get to witness predator activity at its best

Crossing the Mara River is a fascinating occurrence during the migration. During the Mara crossing, you get to experience a range of emotions; anticipation, excitement, urgency, and sorrow. At the end of July, herds of wildebeest gather on the edge of the Mara river. The atmosphere around the river is tense; you can feel the animal’s hesitation. For days, they gather on the edge of the river, watching, screening, and seem to be gathering their courage to cross the river. Some days, the animals leave the Mara edge to craze in the savanna plains, but they know that crossing the river is an inevitable event; and their only way to survive.

After days of gathering, observing, and reflecting, the animals re-assemble on the edge of the river again. This time they screen the water more and for longer. All it takes is a trigger from one animal rushing towards the water, and then thousands of wildebeest, zebras, and gazelles follow suit. They know that time is of the essence, and every second thousand of crocodiles and hippos take a shot hunting the weak ones. The scene is exciting, fearful, and full of sorrow as you get to witness thousands of calves being lost, some to the predators and others to the raging water of the Mara River. Finally, the animals assemble on the other end of the river, taking stock of their losses and coming to terms with the loss of their calves. Even as they breathe a sigh of relief, they know they must take the daring crossing within a month on their journey back to Serengeti.

5. Get to experience nature at its best

During the migration, you get to experience the beauty and cruelty of nature. You get to feel the joy of seeing a new life during the birthing season, but you also get to see nature take away the same life during the Mara crossing. Thousands of wildebeests hardly make it past the Mara; some are lost to the predators, while others die of natural courses while many drown during the Mara crossing. While the experience can break your heart, it gives you a true reflection of life in the wild, where they strive for survival is paramount, and only the strongest survive.

6. The migration is more than wildebeest

While the wildebeest are the dominant players in the migration, the experience gives you a chance to sample the best travel destination in the world. From enjoying high-class hospitality, fascinating culture of the locals, state of the art dining in the wild, and authentic camping in the bust, the migration is a truly memorable experience. The great wildebeest migration is a bucket list of experiences; from nature, travel, and accommodation, it will give you lasting memories.